by SMAc
in Entertainment, Writer
0

Writer, Editor, martial artist and sideburn connoisseur, Jeremy Barlow is the real deal.  I once had the pleasure of working with Jeremy when he was an editor at Dark Horse and we’ve been mates ever since.  He’s a fantastic guy with a brilliant outlook and some really great ideas both on the page and off.  It was exciting to hear, some time ago, that he’d made the leap from full time editing to full time writing and even more exciting to see he hasn’t looked back since.

With Take 5 I ask fellow creators the same five questions each time to give you an insight into their work ethic and routine.  See what Jeremy has to say after the jump…

What work hours do you keep?

I typically work from about 5:00 pm to around midnight, when I’m going full steam. Creatively, those are my peak hours. I’ll often take a long walk in the afternoon, as well, to get the circulation going and to think through any story problems I’m having.

I’d love to get my work done in the mornings or the early afternoons and have my evenings free, but my brain isn’t wired that way—I’m a night owl, and the pistons are firing long after dark. This used to frustrate me, but I learned to work with what I have instead of wishing for what I’m not. Life flows much smoother that way.

What are the first three things you do when you start work?

Before I sit down at the desk, I pour a tall glass of water and a mug of hot green tea, choose some music (if I’m writing to music; it depends on what I’m doing that day), and do some stretches. Staying limber and hydrated, and taking scheduled standing breaks, keeps my mind fresh.

After that, I prioritize my task list and decide where to start and what needs to get done that day. 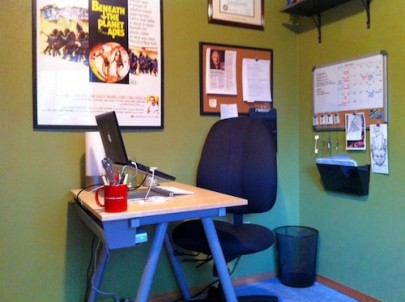 When confronted with that first, blank page staring up at you, what process have you used or do you use to take the next step?

Oh, man. This part sucks. With every new project I start, I feel like I have to learn how to write all over again. It’s agony, and I wonder why I do this to myself, and what I was thinking even following this career, and how this’ll be the last thing I ever do because I’m all used up. And once I’ve wasted enough time on that, once I can no longer procrastinate, I sit down and plow through.

Once I’ve outlined a story, or at least have a good idea of what it is, where it’s going, and how it might begin…I still do almost anything not to sit down and face it. Because at that stage I don’t know what anything looks like or how people sound or even the tone I’m going to strike—at least not until I’m about twenty pages in—and because the possibilities are infinite, I get completely paralyzed.

Of course, all it takes to get through this is to get through it. Writing is all about momentum, so if I start writing something, anything, that usually gets things rolling. But, man, that first sentence is always the hardest.

I use a variation on the Pomodoro Technique, which has been enormously helpful. There are two timer widgets on my MacBook’s dashboard—one set for twenty-five minutes, and the other set for six—and once the first one starts, that’s work time. Doesn’t matter what gets done in that time block, only that I’m focused and working without distraction (no Internet, no email, etc.).

Once the chime sounds, I hit the second timer—that’s my break. Six minutes. I walk around, refill the water glass, play with the dog, do some push-ups, strum the guitar…anything to give my brain a little breather. Once that six minute bell sounds, I’m back at the desk for another twenty-five. Six. Twenty-five. Six. Rinse. Lather. Repeat.

Instead of worrying about how many pages I need to do to hit my deadline, or anything else relating to a task’s enormity that might shut me down, I’m only obligated to those twenty-five minutes. Which is nothing! I tell myself that if all I accomplish that day is working through a single time block, I don’t have to feel guilty. Rarely do I stop at one, though; twenty-five minutes is usually all it takes to get the engines humming and then I’m good for the rest of the night. The timer’s counting down right now, in fact!

What piece of creative advice would you give to a younger you if you could?

I’d say, “You’re going to be terrible at this for a long time, and that’s okay. Putting in the hours and cranking out the pages is more important than waiting until something’s ready before you start writing it. The real magic is in rewriting, but you can’t fix something if it doesn’t exist.”

I wasted my twenties being insecure, knowing I had good work inside me but too anxious to write anything until I’d solved every story problem in my mind, and then locking up when I saw that what I produced was of amateur quality. Which is what almost everyone goes through in the beginning, but I thought it meant there was no hope of this dream ever happening, and I lost a lot of time that could’ve been spent getting the crap out of my system. Because it has to come out sooner or later.

Still, we’re all on our own paths, right? I’m where I’m at because it’s where I’m supposed to be.

What are you working on right now?

My current miniseries with Dark Horse—R.I.P.D. City of the Damned—just wrapped up, and I have a couple of stories coming up in Dark Horse’s Free Comic Book Day 2013 offerings.

Beyond that, I’m building a handful of original creator-owned projects with some really talented artists. Some crazy, go-anywhere, do-anything science fiction stories with a lot of heart, a retro Spy-Fi tale set in the ’60s, and a horror story about a boy and his ghost. On all of those, I’m still staring down that dreaded first sentence, so we’ll see what kind of a deal I can make with myself to keep me in my chair.